Judging by past photos of our garden, spring was indeed early this year in the Pacific Northwest.  This is both a good and a bad thing, in my opinion.  Good because spring is fun and I love watching things bloom and grow and burst into life.  Bad because weeds are also doing this.

I spent a couple hours weeding in the strawberry patch and "orchard" today, in between rain showers.  While I was out there, I collected our first good strawberry harvest of the year.  I'm glad we decided on getting varieties that fruit at different times, so we can have a prolonged strawberry season!

I thought I would share a really simple recipe for a drink I've been having a lot lately, usually with frozen strawberries.  Tonight's strawberry shake was a treat because I made it with fresh-from-the-garden strawberries.  The cashews have a substantial presence, without making the shake too rich.  Yum yum yum.

This will make one large shake or two medium-sized shakes.

Blend all the ingredients in a blender until smooth!

*If you use frozen strawberries, as I usually do, the shake will be a little thicker.

I've been a bad, bad blogger, but that's going to change.  Thanks to Vida Vegan Con (and Vegan Cuts' generosity), I'm going to get back into the swing of things.  And I think I'm going to open this blog up to be more of an "everything" blog...pretty much like my previous one.

While I was busy attending VVC sessions, eating tasty samples, and mingling with bloggers from around the world today, Andy and Emerson were having their own fun.   Kittee will have good laugh at this.

I really enjoyed today's sessions, especially the panel on vegan parenting (although, I wish there was someone there representing adoptive parents) and Vegan MoFo.  I don't know about the rest of you, but I'm getting excited for MoFo!

Okay, okay!  I'm off to the Vegan Mini Mall for s'mores and tacos, and socializing, of course!

*Not officially part of the swag bag, but I managed to snag a few.  The Cinnamon Chipotle is SOOOOO good and palm-free and fair trade and organic!  Seriously.
Posted by Amanda at 7:40 PM No comments:

It's happening now that several times a day I find myself outside, inspecting the progress of the members of my garden.  I snapped these photos this morning.

My beautiful and fragrant Lindera benzoin is budding.  This winter, we moved it from a too-sunny spot in the front garden to a shadier spot in the back.  I love this plant so much.  It's actually a Northeast U.S. native, but I justified the purchase by the fact that the dried berries can be used in the place of black pepper.  The leaves can also be used as a tea (they're so unbelievably fragrant!) and the bark has medicinal qualities.

We bought this Rhododendron from a neighbor who propagates several plants.

The Berberis aquifolium we planted in the past couple of years are blooming for the first time. 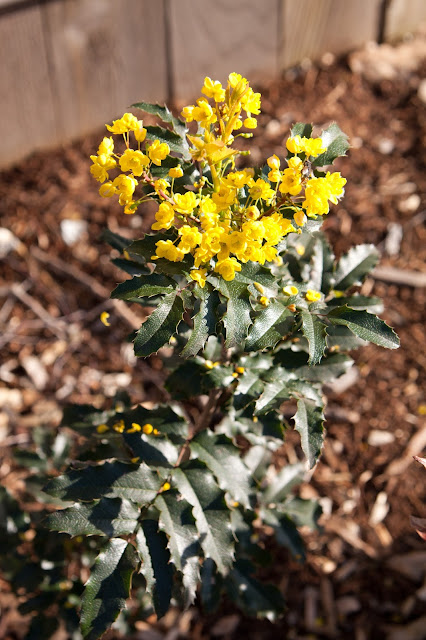 We now have probably a dozen or so native flowering currants in our garden.  The flowers vary from white, to light pink (seen below), to a more vibrant pink.  I love the fragrance of these guys.


And the last of our three plum trees has FINALLY blossomed.


I'm excited to announce that our weeping Santa Rosa Plum, which Matt and I planted in the fall of 2010, began weeping this past year AND this spring finally has blossoms!!  It's covered in them!  I hope this means it will be covered in fruit!

Our vegetable beds look a little sorry.  Matt and I have been sowing them during the last few weekends, but have been leaving the greens alone until they've bolted.  Right now they're super yummy.

I have to give a shout-out to my bud, Kittee, for this cold frame idea.  I chose to use this particular raised bed because this area is not being sown right now (actually it's for the tomatoes, which I just started in the cold frame.)  I nestled the starter pots in the soil for extra warmth and room to grow upwards, seeded them, and placed the window on top.  Not a bad cold frame for a $2 old window from the Rebuilding Center.

I'm kind of over starting seeds indoors.  I don't like having to deal with leggy plants, losing dining room table space, nor doggles that like to knock everything over.  Hopefully this method works. I'll letchya know.
Posted by Amanda at 8:19 AM 1 comment:

Our collards and kale have been excellent lately, so we've been enjoying them in a myriad of ways.  Last night I made Isa's Smoky Tomato Lentil Soup, but subbed ribboned collards for the spinach.

The soup is as you would imagine: smokey, full of good flavor, and hearty.  Just the thing for this almost-spring weather.  And for me, this meant throwing together a meal, rather quickly, with ingredients I had on hand.  I recommend making a batch for yourself!
Posted by Amanda at 2:13 PM No comments:

Email ThisBlogThis!Share to TwitterShare to FacebookShare to Pinterest
Labels: Edibles

It's true!  The birds have been telling me and so have the flowers.  Take a look at what I have blooming already in the garden.

Oemleria cerasiformis is native to the Pacific Northwest and will grow to be 5-16 feet tall. Important  as a source of food and medicine to Native Americans in this region, the Indian plum has a small edible fruit that birds, rodents, deer, bear, foxes, and coyotes also relish according to Rainyside Gardeners.   I doubt we'll see those larger mammals in our little urban garden.  We will, however see hummingbirds and bees hovering around the blooms of our two Indian plums.  I plan on taking a flower of each to work tomorrow to have our Taxonomist sex them.  If we don't have a male and female, no fruit!


Ribes sanguineum, or Red flowering currant, is a gorgeous native plant, which we have planted in abundance throughout our garden.  Soon, to the delight of hummingbirds and pollinators, these plants will be covered in pink blooms.  Rfcs are especially fast-growing, which makes them all the more exciting.  The fruit is also edible, but not too tasty to humans.

Ribes sanguineum 'Alba' is a white variety of flowering currant.  Matt and I just purchased two from Echo Valley Natives in Oregon City, which we installed along the foundation in the front of the house.  I look forward to the cascading white blooms covering the shrubs as they mature to their 13 ft height.

One of our non-native plum trees has begun blooming.  Hopefully it will save some of those blossoms for pollination with the other two plum trees.

While I was busy snapping photos of the blooms around the garden, these two were stealing collard leaves. 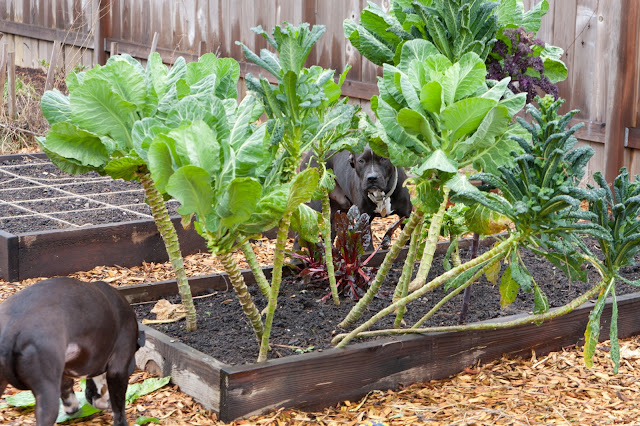 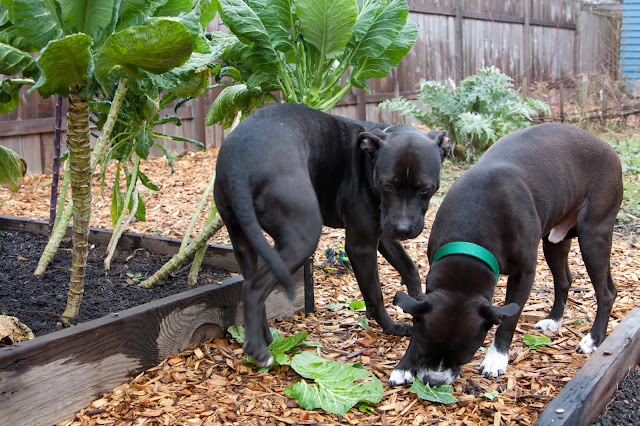 Matt and I are getting our vegetable beds in order.  For now we have some delicious kale and collards that are probably the tastiest they've been in a while.  Doggle approved.
Posted by Amanda at 2:12 PM No comments:

Matt and I have been on a mission to find regionally-local manzanitas to introduce in our garden.  Manzanitas are the taller relatives of kinnickinnick (in fact, they're the same genus).  Bees and hummingbirds love 'em.  Like kinnickinnick, manzanitas are evergreen and have a fairly large range, occurring from southern British Columbia through Mexico.

We were looking for two species, Arctostaphylos columbiana (hairy manzanita) and Arctostaphylos canescens (hoary manzanita).   As it turns out, finding particular species of manzanita can be challenging, as this genus has a tendency toward hybridization, including between "manzanitas" and "kinnickinnick".  Short of wild-harvesting plants, the best we could do was acquire a few manzanitas that do well in our region.


During a recent visit* to Echo Valley Natives in Oregon City, Matt and I picked up a wild-collected manzanita.  Again, due to the wide-variation in the genus related to hybridization, we're not entirely sure what type this is.  It's now living above our retaining wall in the front.

Last weekend we took our first trip to Cistus Nursery on Sauvie Island.  For reasons I don't completely understand it's still the slow season there for retail, so there wasn't much to see.  However, that didn't stop us from spending ages deciding on three manzanitas to bring home.

Manzanita flowers might look familiar to blueberry growers.  Vaccinium (blueberries/huckleberries) and Arctostaphylos are both in the Ericaceae family.

Arctostaphylos x 'Austin Griffiths' is a hybrid described as having "glossy green leaves and dark maroon-brown bark, forming an attractive backdrop for a large cluster of soft pink flowers.  The blooms appear in early winter, providing a valuable nectar source for hummingbirds and bees.  Over time, this upright manzanita can reach a height of up to 10 feet and width of 4-6 ft."

And we got two itty bitty Arctostaphylos myrtifolia to flank the steps leading up to the front door.  It's hard to tell from the photo, but they have adorable teardrop flowers and bristly stems.  Upon researching this species, A. myrtifolia appears to be a federally listed "threatened species" and is endemic to the Sierra Nevada foothills (so not quite native- oops.)  We were looking for a manzanita that wouldn't grow more than four feet and this fit the bill according to the folks at the nursery.


*Echo Valley Natives turned out to be the only place I could find Euonymus occidentalis, or Western Wahoo.  For some reason this wonderfully showy native plant is almost impossible to find in nurseries around here.  We brought home two.  They're gorgeous in the fall, especially.  I'll take photos of ours at some point.
Posted by Amanda at 8:16 PM 1 comment: 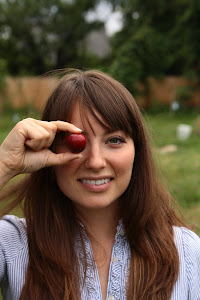